How We Got Our Start

In 1980, Ron teamed with local Lexington, Kentucky sportscaster and producer Tom Hammond to form Hammond Productions. Tom’s role as a sales announcer for Keeneland and other companies provided high-profile marketing opportunities for the company. Hammond Productions soon established itself as the premier producer of thoroughbred visual communications tools.

Throughout the eighties, the company continued its steady growth by adding local and national equine programming such as “The Winner’s Circle” and “Inside Harness Racing.” The company even produced shows for other local markets, such as “This Week at Pompano,” which aired in the Miami market. Creating farm presentations and stallion and yearling videos were a company mainstay during these times.

The mid-eighties saw diversification into the corporate and industrial markets. The addition of clients like Valvoline and IBM to Hammond’s roster helped the company grow in numbers of employees as well as sales. These new clients utilized the technology for a variety of applications, including training, sales and marketing, new product rollouts, and electronic newsletters. In 1990, Tom Hammond relinquished a large part of ownership, and Ron Mossotti assumed the role of company president. Tom Hammond, who was by now a full-time employee of NBC Sports, remained a part of the company as a consultant and an on-camera personality.

Hammond believes it is our professional responsibility to keep abreast of new technologies and determine how they might be incorporated into our business model. In the 2000’s, Hammond converged its two primary business approaches of creating and delivering highly-professional content through HD video production and interactive technology, to provide a new and unique service called Digital Signage, the creation of digital media networks.  As a result of this initiative, Hammond became a noteworthy presence in the business of providing Digital Signage Solutions across many markets. 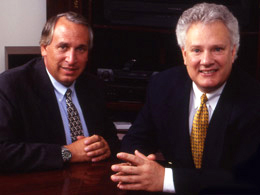